So, a friend and I were testing Endless OS on a Dell Optiplex 755 (3.0GHz Core2Duo/4GB/80GB/DVD-burner/ATi HD2400 video card) and a Dell Optiplex 620 (2.8GHz Pentium D/2GB/80GB/DVD-burner/Intel integrated video) to see if it is suitable for donation to small farming communities in the Texas Panhandle. Installation of the live installer to USB thumbdrive went very smoothly once I switched from Vista and Windows 7 (both fail) to Windows 10. Installation of Endless OS 3.0 to the Dells went very smoothly, very happy! Initial updates went well, too. But updates two days ago (coinciding with release of Endless OS 3.1.2) broke both machines. On both computers, the screens went black during installation of updates (31 updates) and the hard drives just churn away–overnight and all the next day. Hard shutdown (press and hold power button), wait, power back on, screen remains black and hard drive just keeps churning away–disk activity light is steady-on and hard drive activity is audible. If I move the mouse, the pointer is displayed until the screen times out and turns off again.

How widespread is this? Obviously these systems are in an unusable and apparently unrecoverable state. If we had already distributed systems and they were in widespread use (my friend, Stan, has a computer store with hundreds of old Dell computers licensed for Windows XP and Windows Vista that this could potentially be deployed on), what is the fix for people’s documents, like budgets, homework assignments, crop yield and water usage records and calculations, scanned-in receipts and paperwork?

Hi @TowerGuy74, Thanks for reporting this! I’ve elevated this to highest priority to investigate. Hope to have some insight soon.

@TowerGuy74 Wow, that is a bad problem indeed!

First of all, I’d like to reassure you that user data is almost definitely not impacted, and in the worst case could be retrieved by booting a live USB and mounting the internal hard drive. Hopefully we’ll be able to figure out a way to get you back up and running without that, but let us know if you need instructions for such a data recovery procedure.

Second, I’m pretty confident that the upgrade of the OS itself to 3.1.2 is safe. We’ve done a lot of testing on many hardware models, and even after reading your report I verified the OS upgrade from 3.1.1 to 3.1.2 on a laptop that I had not yet updated. Unless there is a driver compatibility issue specific to the Dell Optiplex (which would be much more likely to show up on initial install rather than after an upgrade), I don’t think the problem here was with the OS upgrade per se.

Third, this is the first report we’ve received of such a problem.

That said, obviously something really bad has happened, and we would like to figure out just what went wrong.

You mention installing “31 updates”. That implies to me that you were in the app center, saw that there were 31 updates available, and then hit the “update all” button. Is that correct? And, to be completely clear, the initial problem happened while waiting for the app updates, not upon rebooting, correct?

If so, I suspect this is an issue with app updates rather than the OS update. Of course, it does not make the issue any less of a concern for you, but it is an important distinction in understanding the root of the problem. Along with the OS release, we published a number of app updates, so even you did not update the operating system you would see a number of app updates available.

Did you have the machine in a dual-boot configuration, or had you completely replaced Windows on the machine with Endless? If dual-boot, do you know how much of the available hard disk space you had allocated to Endless?

Had you manually upgraded the OS to 3.1.2 (via Settings --> Details --> Check for updates now)? Had you received a notification that updates were installed and you should now restart the computer? If you had not upgraded the OS itself to 3.1.2, again it sounds like something likely went wrong during the app updates.

I’m wondering if there is any possibility that in trying to install multiple updates at the same time there is some way that the disk became full, and now every time you log back in the update process tries to continue and again fills the disk. Or, perhaps even if the disk is not full, something else is stuck in the process of trying to resume the app updates.

If by any chance you can get to a console window by hitting Ctrl-Alt-F2 (or perhaps Ctrl-Alt-Fn-F2 depending on your keyboard), please log in as your user, and then try a few things…

See if the disk appears full

See if any process is consuming a lot of CPU cycles

Then, try Ctrl-Alt-F1 (or Ctrl-Alt-Fn-F1) to get back to the normal graphical interface

Please let us know any further details you can, and let us know if you are able to run any of the commands I suggest in a console window. In the meantime, we’ll see if we can reproduce a problem starting with an older version of the OS and updating all apps.

@TowerGuy74 A quick update… We have tried installing older versions and updating both the OS and all the applications on a few different devices, and have not been able to reproduce the problem you have reported. If you can provide any more details to the questions from my previous message, we’d be happy to try to further understand what may have happened and figure out how to fix the problem.

This set of e-mails did not reach me until yesterday, I had pulled that PC
out of service and swapped its memory into another; I just pulled it over,
set it up with RAM (two of the same 1-GB sticks, two 512-MB sticks that
were not present before). After passing boot diagnostics, it booted to the
Endless OS logo -> login screen -> desktop, just like it should. I don’t
think the problem was the other pair of memory sticks, as the computer I
placed them in has been running just fine–but I also am at a loss for the
disappearance of the problem!

After the second hard-shutdown, would your package manager have excluded
the new software packages? The first notice on my desktop is of updates
available, checking App Center it shows 9.

Since I was able to log in, I have the following answers to the questions
given:

“You mention installing “31 updates”. That implies to me that you were in
the app center, saw that there were 31 updates available, and then hit the
“update all” button. Is that correct? And, to be completely clear, the
initial problem happened while waiting for the app updates, not upon
rebooting, correct?”

“Do you know which version of the OS you had installed originally,”

The installer version was 3.0

“and which version of the OS you were running before the problem?”

No, I had installed updates as they appeared in App Center but was unaware
of what versions–that information is sometimes not present.

“Did you have the machine in a dual-boot configuration, or had you
completely replaced Windows on the machine with Endless?”

No, I have not done that–ever.

“Had you received a notification that updates were installed and you should
now restart the computer?”

Yes, that has happened more than once after installing updates through App
Center.

“If you had not upgraded the OS itself to 3.1.2, again it sounds like
something likely went wrong during the app updates.”

I am including a screenshot of the result of the top command, but as you
say this seems to be a result of package updates and it has simply gone
away. Perhaps there is a problem in the higher-memory portion of the RAM
that activated during update installation, but thinking that might be an
issue I did run a complete extended test using the built-in Dell
Diagnostics before taking the machine out of service, and all memory
passed. The behavior was more descriptive of a code-loop, perhaps created
when the update installer was running? Perhaps the installer adjusted its
memory call when I pulled the original four 1-GB sticks [after the first
hard-shutdown] and installed a different two 1-GB sticks before starting
the machine [before the second hard-shutdown], and it was nearly done with
installations when I did the second hard-shutdown?

I will get with Stan later today to find out if he still has his GX 620
sitting around unaltered, and will check that machine out as well if it is
still available.

I forgot to attach the screenshot. 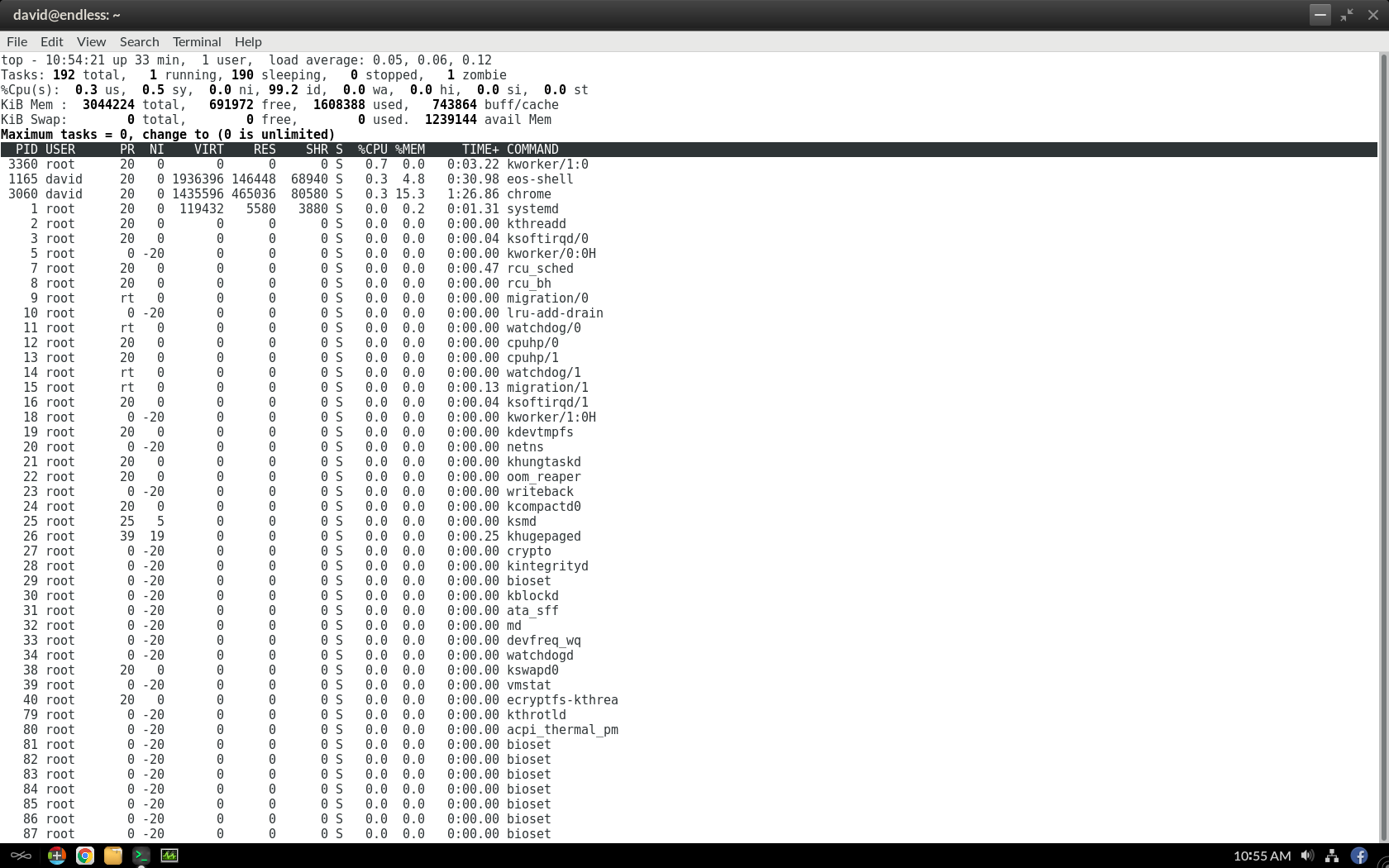 Thanks for the detailed reply, @TowerGuy74.

Very helpful to have confirmation that the problem was not with the OS upgrade to 3.1.2, as you are still on version 3.1.1. And, while we have made some improvements to the app center in the 3.1.2 OS, there are no known issues on 3.1.1 that would account for the problem you experienced. And, good to know that it is not somehow related to running out of disk space.

One of my concerns was that the app updates might try to do too much in parallel, but I just checked and confirmed that at least in the current implementation we only update one app at a time, though it still may be using a lot of memory in the process.

Another one of my concerns was that the app center (gnome-software) would automatically continue to try to update all after restarting the computer, but on further testing I don’t believe that would happen, so in the end once you got into the bad state, it doesn’t sound like it was strictly a software problem. And, if I am correct to presume that on reboot the hard drive just kept spinning prior to loading the operating system, that would also make me suspect a hardware issue.

Like you say, maybe the problem is somehow related to the memory sticks.

Another possibility is that the hardware overheated. During app updates, the processor is busy calculating and applying differences from the old version to the new, and at least one core of the processor is likely to remain almost fully burdened throughout the process. Once in an overheated state, it is possible that a simple reboot would not clear it, but it would need some time to cool back down.

Or, maybe a combination of the two. Perhaps memory that tested fine in a cold machine ran into problems once the machine heated up?

Anyhow, I’m glad that you were able to move past the issue at least on the one machine. If you do figure anything else out when looking at the other machine, or if you ever reproduce it again, I’d be really curious to hear. In the meantime, though, I’m going to assume that this is somehow hardware-related and nothing that we have to further investigate on our end.

Thanks again, and I hope you continue to enjoy Endless and find it useful for deployment on your supply of old computers. As long as they are new enough to have 64-bit processors, I would expect that most of them will work well.