Downloadable images for new users will be available in the next few days.

We heard your feedback! Previously, using Kolibri on Endless OS would store all content within one user on your system. This meant that, when a device is shared between multiple users in a family or classroom, users could not access the same offline content.

In this version of Endless OS, Kolibri now runs system-wide, and downloaded content is accessible to all users on the system, instead of a separate data directory for each user. This is more convenient, and saves valuable disk space if multiple users want to use the same content!

If you have already been using Kolibri, you can switch to the new behaviour and preserve your data. We added a migration script that will migrate the existing content and make it accessible system wide. If you create a new user on your system then the content will be available to this new user. Please run the eos-kolibri-migrate command in the Terminal App. 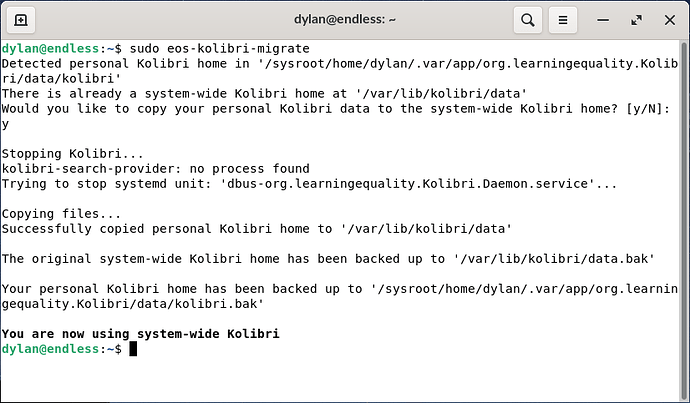 In Settings, “Keyboard Layouts” are now referred to as “Input Sources” . This is consistent with GNOME, and is more correct for languages where an input method editor is used. The functionality is unchanged.

Once I posted problem with Endless OS Keyboard. On this link:

Does anyone know how to turn off this on-screen keyboard which keeps poping up each time I uses the touch screen? I’ve check the setting in the universal Access, Screen Keyboard and it is off, but each time I touch the screen it always pop up. When I try to use the On-Screen Keyboard, the keys were errorneous. I was unable to use capitalize letter, pressing the

do not have effect. Unable to produce symbol. pressing ! produce 1, pressing # produce 3, etc. The…

It is closed but not answered to the end. I tried searching for topics on virtual keyboard on this forum, but I seems to be lost.

So is this realease, on-screen keyboard / virtual keyboard things is fixed, or still under testing?

The Endless OS user interface is based on GNOME, and the on-screen keyboard is inherited from there, along with any bugs and oddities it has.

Since we now ship a much newer version of GNOME compared to when you reported this in 2019, it would be worth retesting on the latest release. Even though we did not take any specific action around the OSK, the updates we have applied to the base OS may have helped the situation. Or did you test that already?